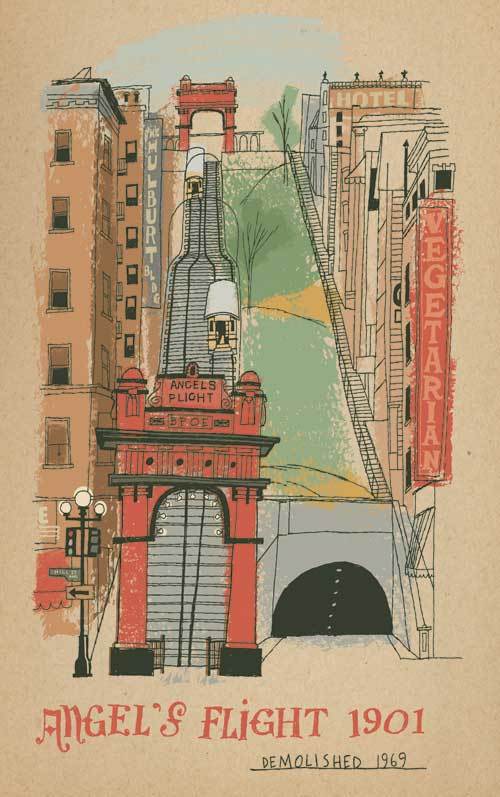 Designmatters at Art Center is producing a book as part of an education initiative aimed at understanding and preparing for a major earthquake in the Los Angeles area. I taught a class last term that had students producing images to accompany the text throughout the book. Christoph Neimann came in for a workshop, he and Ann Field contributed illustrations to the book, and Stefan Sagmeister is responsible for the design of the entire book.

I was also asked to make some images as part of the introduction to the Narrative section that contains a collection of fiction, poetry, and evocative essays. This series deals with the temporary nature of the Los Angeles landscape, its history and mythology. I placed the drawings in old books as a reference to the literary nature of the section. 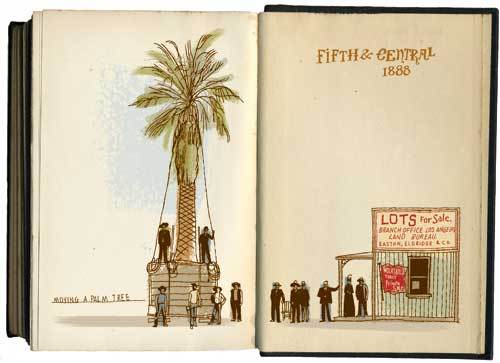 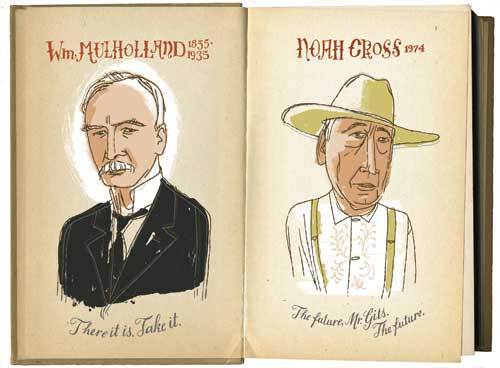 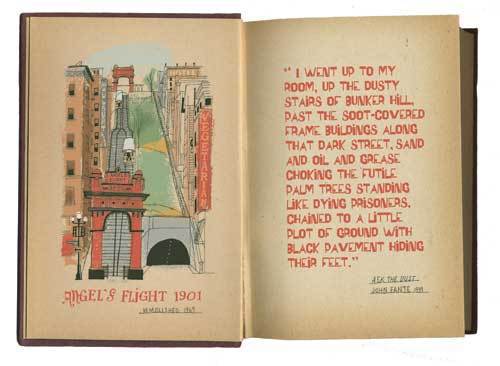 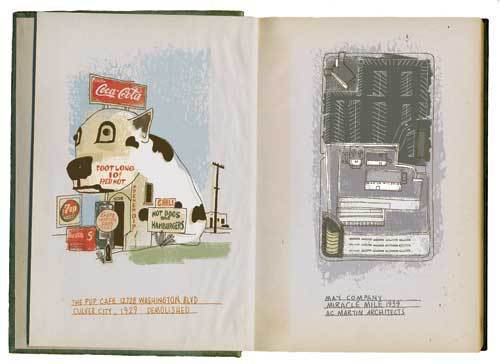 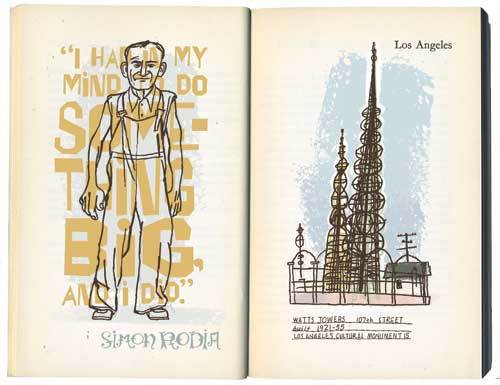 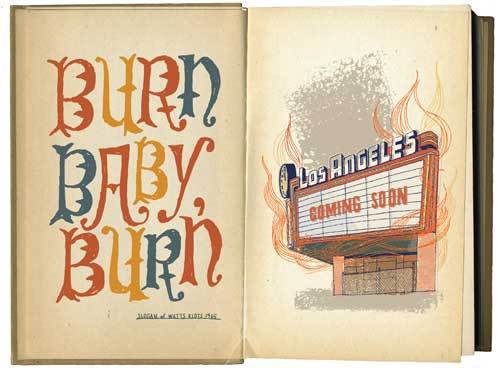 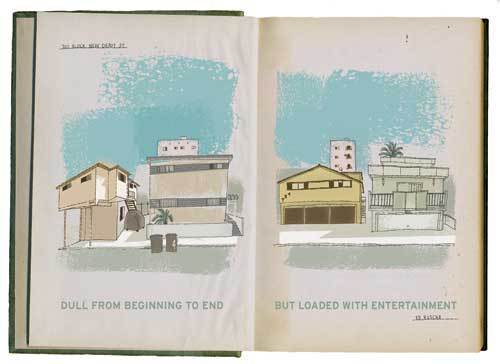 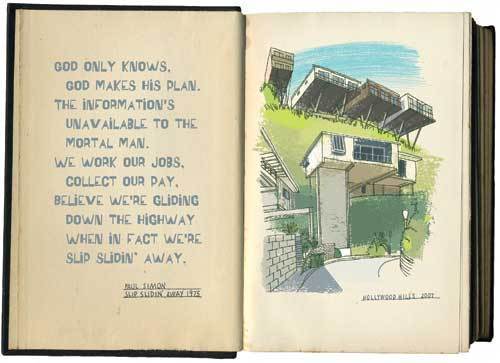 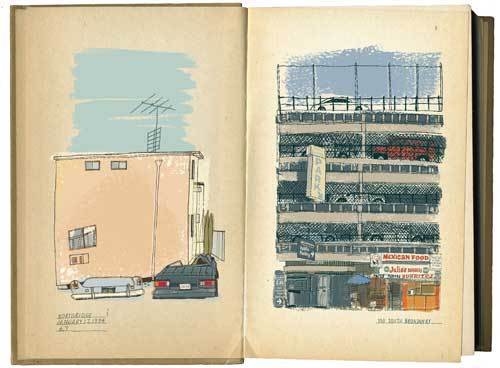 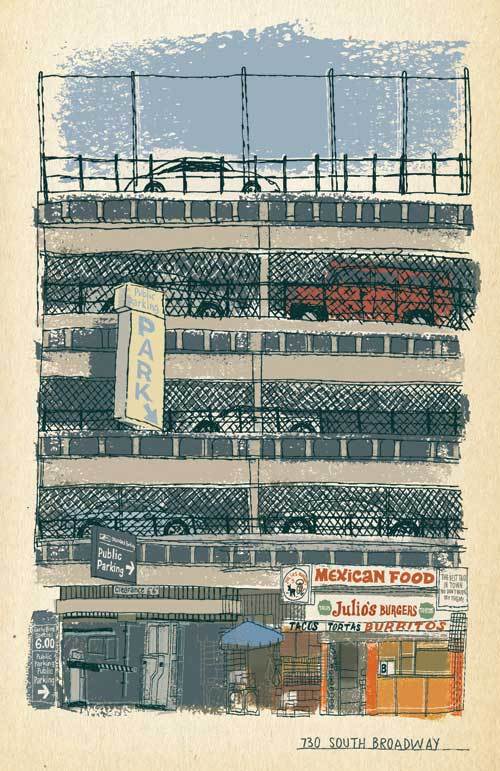 I started a series of drawings in my sketchbook, it's a kind of visual quiz of great movies. Each series is  a sequence of six drawings of shots from classic films (in the order they appear on screen.) No portraits of movie stars, just iconic images from the film. When I finish 100 movies, I'll see about getting them published as a book.
A book like this could sell dozens.

I met up with the band in Louisville, at the Seelbach Hotel, the setting for Tom and Daisy
Buchanan’s wedding reception in The Great Gatsby. The street’s named for hometown hero
Muhammad Ali. Our next stop was a 10-hour drive into the Deep South, Meridian MS. The band rides in a charter bus but Wynton likes to get an early start and arrive a few hours before everyone else. Early meant 4:00 am. Meet downstairs, load the SUV and hit the road. I slept in my clothes to make sure I wasn’t the last one downstairs.

Raymond “Bossman” Murphy is the road manager and handles most of the driving. He
has the ability to solve any problem the road may offer before it becomes a problem. The car is always stocked with whatever we need, and the travel from town to town is so smooth that I
forget how many miles we’re clocking during the week. Production manager Ernie Gregory also rides with us, Ernie’s been around jazz his whole life and he has the stories to prove it.

Every morning we stop for breakfast at a Cracker Barrel. Every single morning. There are  Barrels spread 20 miles apart on every highway in the South, and inside each one’s exactly the same. About 9:30 am we pull in and everyone but me has the menu memorized and orders within two seconds of sitting down. Wynton says it’s like eating at home; everything’s familiar and reliable. Although there’s a Groundhog’s Day vibe to it, eating here every morning does get to feel kinda homey after a few days.

Just before the exit for Meridian we spot a sign for Toomsuba, and get off the highway to check out a town with that name. It turns out to be about five houses, two churches, and a run-down catfish farm. Ernie says that if we drove by here after a big rain the road would be
covered with dead catfish.
We’re not far from the spot where three civil rights workers were murdered in the summer of 1964. A lot has changed in America since then, but traveling through the South this week I feel a not-so-subtle level of racism still looming here. We spot a number of Confederate flags, there’s even one tucked away backstage in the historic Opera House when we arrive.

We go from the vintage glamour of the Seelbach Hotel to the Comfort Inn; right off the highway, surrounded by fast food and a Sam’s Club. The staff treats the orchestra like royalty, I think that everyone who works there is hanging around the lobby during the time we’re here.

The instruments and sound equipment travel in a rental truck, there’s a crew of about four guys who load, unload, and set up the stage at each town with a quiet efficiency.

The routine’s the same in every town; check into hotel, grab some lunch, soundcheck at 4, dinner at venue, concert, sleep, up in the morning, hit the road to next town, check into hotel, repeat. Sometimes there’s a few hours, or a day off to check out some sights, sample the local food and nightlife, but everyone’s back at the hotel pretty early. There have been some musicians in the band who could play, but had a hard time getting along with everyone and being on time, and they didn’t last long out here. This is a good gig for a jazz musician and everyone wants to make the most of it.

In Atlanta, Wynton introduces a guy to the band at the end of the soundcheck. His name is Bob Havens, he played in Al Hirt’s band, and for 22 years was a trombonist for the Lawerence Welk Orchestra. Bob asks to play one with the band during the soundcheck, but the guys are already leaving the stage so Wynton asks him to play something during the concert that night. I see Bob walking around blowing into his mouthpiece backstage before the concert, getting ready. He gets introduced and walks onstage to play with a small group set-up that does a number each night.They play Way Down Yonder in New Orleans and Bob plays like he’s played with these guys for years, then he takes a  solo, beautiful tone, structured, soulful, he tells his story. The guys are all looking at him, and at each other, with smiles and nods of admiration. Bob walks off stage to a huge ovation with a spring in his step I didn’t see before. Later, I ask Wynton when he told Bob what song they were going to play. “When he walked onstage, I just told him before that it’d be something he knew.”  Wynton said that he could tell just by looking at him at the soundcheck that he could play.

Walking to the gig in Asheville, NC

My last stop on the tour was Savannah. The band was continuing on for ten more days of concerts. As soon as I’m out of the protective range of Bossman Murphy, I encounter some trouble. Early in the morning, my taxi has a flat on the way to the airport. When the driver gets out to change the tire, I take this rare photo of the sun and the moon in the same picture.
permalink | comment
Topical: Jazz at Lincoln Center

Last spring Wynton Marsalis invited me to join him and the Jazz at Lincoln Center Orchestra on the road for a week of concerts in the South. The schedule took us through Louisville KY, Meridian MS, Nashville TN, Asheville NC, Savannah and Atlanta GA. Six concerts in seven days. It was such a pleasure to hear this band every night for a week, and it was an honor to hang out with these extraordinary musicians. The road teaches many lessons, I tried to keep my eyes and ears open, and not get in the way.

Wynton and I met on a poster project in 1990 and we have maintained a friendship over the years. We collaborated on a book about jazz musicians "Jazz ABZ" published by Candlewick Press in 2005. (The book makes a nice gift.) He has a list of about 100 things he's working on at any time, but he loves getting out on the road. There's a strict schedule and structure to follow, but like the music, there is also room for improvisation and some mischief. I sense that he loves being out here with the guys, playing music, meeting people and spreading the feeling of jazz around the country. Years ago Dizzy Gillespie's manager told me that once when Wynton and Dizzy's United Nations Orchestra were in the same town, Wynton asked to sit in with the band on his night off. He didn't want to take any solos, he just wanted to sit in the trumpet section and play for a night.

Each afternoon there’s a soundcheck at 4 pm. The band runs through 4-5 songs, and reviews anything that may be presenting a problem. David Robinson, the soundman adjusts the microphones for the best sound for each hall. I never hear anything that doesn’t sound great. The musician’s personalities are reflected in their casual dress between concerts. Sweatsuits and various styles of hats that can tell a careful observer something about the musician and how he’s feeling that day.

Dan Nimmer is always the first one to sit down and warm up. Each venue has its own piano, so he must get comfortable with different instrument each night. He’s 25 years old and he plays with a sense of swing that you might not think was possible if you met him on the street. He told me that when he was a ten-year-old kid in Wisconsin, he’d sneak out of bed at night and practice by placing his hands on the keys and playing silently without pressing down.

There’s a lot of time to kill backstage and chess is played by a number of the guys at a very high level of competion. I hear a lot of bravado, and big talk about who is going to whip who, and tall-tales of past victories, even victories over a musician who is no longer in the band. In fact, I notice these tales of monumental conquest seem to grow with the defeated players absense.

Joe Temperly plays the gigiantic baritone saxophone, and is the elder stateman of the band. He replaced the legendary Harry Carney in Duke Ellington’s band in the 1970’s and he carries that legacy to JALCO with dignity and style. Joe’s solo on “My Funny Valentine” is, for me, a highlight each night. I can tell from the looks on the guys faces when he’s playing how much they all admire and love Joe.

The hour before the concert reminds me of batting practice before a major-league game. Everyone has their own routine, Brooks Brothers suits are ironed with various degrees of concern for personal appearance, horns are unpacked. The guys joke, or walk around slowly, concentrating on their tone, lost in thought.

Backstage at The Savannah Music Festival

Some nights I’d get a ticket to sit out front with the audience, but I actually preferred finding a spot backstage and watching from the wings. I missed hearing a lot of great musicians who played before my time: Art Blakey, Count Basie, Duke, Bird, Charles Mingus. But sitting in the wings and listening to this band, I feel extremely lucky to be around today hearing this music.

In every town we visit I sense a feeling of community that has been built up by the band’s past visits. There’s always a few guests and young musicians sitting backstage, looking in from the wings. Many of the guys in today’s band have grown up doing this exact thing.

After the concert, family, friends and fans come backstage. Young musicians nervously approach the guys, and I hear a lot of impromtu lessons and words of encouragement being given. I saw Carlos Henriquez give a young bass player his phone number and instructions to call him anytime. These musicians are extemely generous and kind, and I know a few words from them can make somebody’s week. I'll post some more drawings from the tour in my next article. Thanks to Lou Brooks, who saw these drawings and invited me to join you all at Drawger. I've been stalking this site for a while and there are so many artists here that I admire. I'm looking forward to being part of the scene.
permalink | comment
Topical: Jazz at Lincoln Center